Pasadena, CA – March 26, 2018 – Center for Asian Americans United for Self- Empowerment (CAUSE) has partnered with over 70+ community organizations and 15+ press agencies in the Asian Pacific American (APA) community to host the first ever APA facing-Gubernatorial Debate on Friday, April 27, 2018, from 7:00 PM to 8:30 PM (PST). Admission to the debate is free and open to the public at the Sexson Auditorium of Pasadena City College (1570 East Colorado Boulevard, Pasadena, CA 91106). 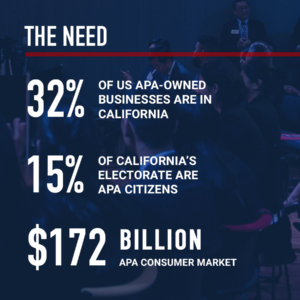 The selection criteria for candidates to participate in the 2018 APA-Facing Gubernatorial Debate was based on the data results from extensive polling conducted at the time of determination.

The following candidates have confirmed their attendance:

Candidate Gavin Newsom, CA State Lieutenant Governor has declined to attend the event. Representatives from Newsom’s campaign team officially responded as follows, “Unfortunately based on the large number of debate requests and competing demands for the Lieutenant Governor’s time, we will be unable to attend. For context, by the end of February, we will have already completed seven candidate debates and forums…”

The response drew concern from leaders within the APA community. “The APA community will no longer be associated with being soft-spoken,” said Charlie Woo, Chair of CAUSE. “…we are a community that will not be ignored. Our gubernatorial candidates need to treat us with the same respect as all other communities.”

Paul Song, President of Physicians for a National Health Program California, also chimed in and encouraged candidates to take APA voters seriously. Understanding that the debate has the ability to impact the decision-making process of APA voters, Song emphasized, “We are not a monolithic group, but rather politically diverse and independent minded. Therefore we encourage all gubernatorial candidates not to dismiss this wonderful opportunity and to readily participate in the [debate]. It is very important for each candidate to share their visions, goals, and to speak directly to an important constituency.”

Today, APA communities are the fastest growing ethnic group across the nation. Additionally, more than one-third (5.7 million) of the United States’ APA population resides in California. California is also home to the largest number of APA-owned businesses (32% of the total in the nation) and has a consumer market of $172 billion. With the APA population comprising nearly 15% of California’s electorate, the APA community could potentially decide the outcome of the 2018 elections.