UN COP26: The World Harmony Bell Sounds the Alarm for the Earth Crisis

NEW YORK, Nov 3 – On the margins of the 26th UN Climate Conference (COP26) , which started on the 1st of November 2021, in Glasgow; The World Harmony Foundation (WHF), a UNEP non-governmental organization recently afforded Observer status with the UNFCCC.

Chairman Frank Liu of WHF was invited to  participate in the  “Ministerial Green Tourism Summit in Harmony between Mankind and Nature” which was held on the November 3, 2021. Chairman Frank Liu exchanged best practices with ministers at the meeting and was delighted to hear that the World Harmony Clock, will be bought to the Global Harmony Initiative. WHF co-sponsored the “Global Harmony Action and Future City” summit forum, organised by the World Harmony Foundation, the Green Community Organization, the Future City Organization and the China Circular Economy Industry Development Centre, which was held in the Glasgow HUB Culture Harmony Club. The said high level forum was attended by the Environmental leaders of government organizations; dancers and singers of UN Environmental protection ambassadors, together with Chairman Frank Liu and WHF European Chairman Yan Li; to discuss how to highlight the climate change crisis for mankind, “By sounding the Harmonious Bell, together we work to protect Mother Earth.” 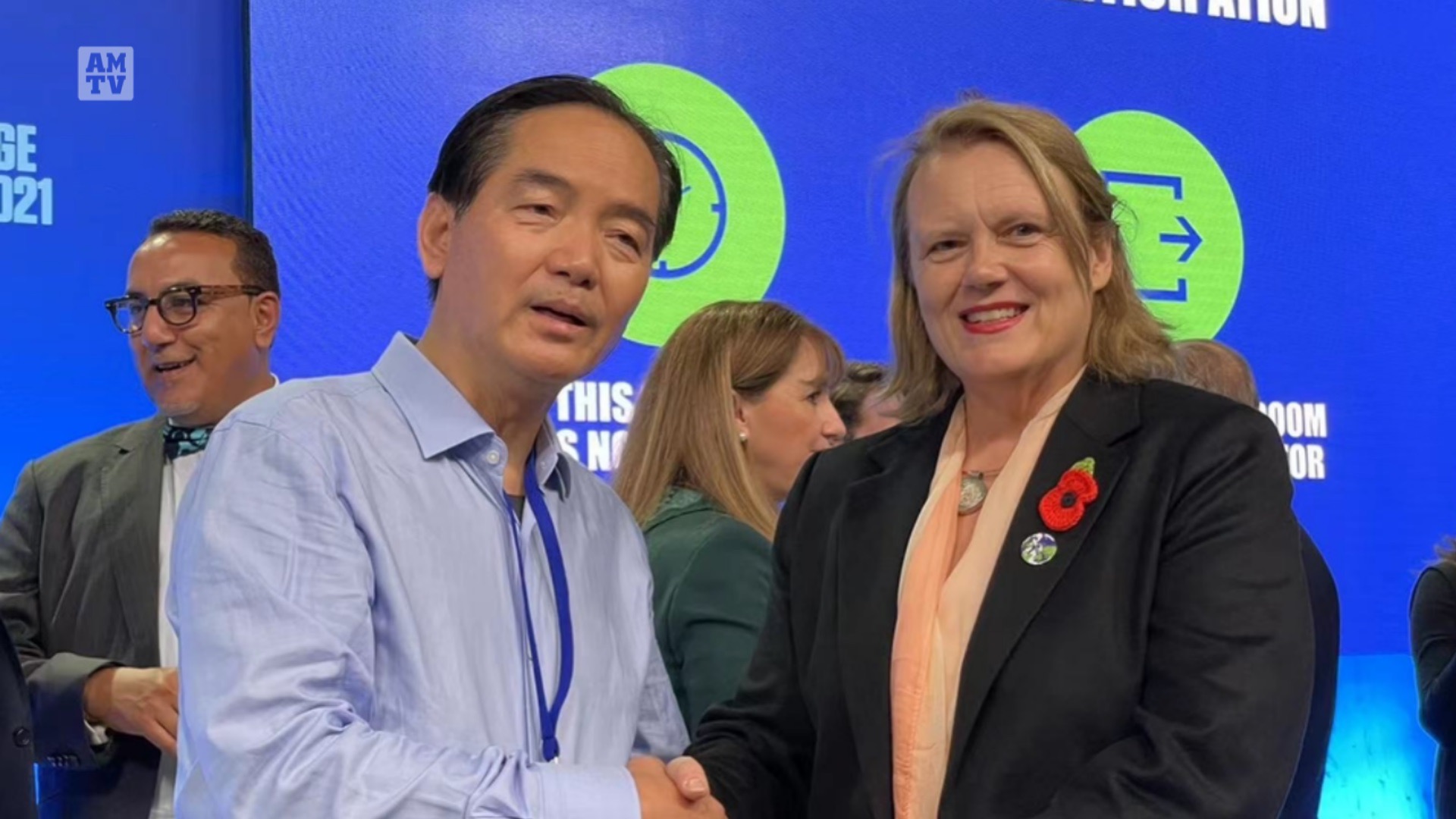 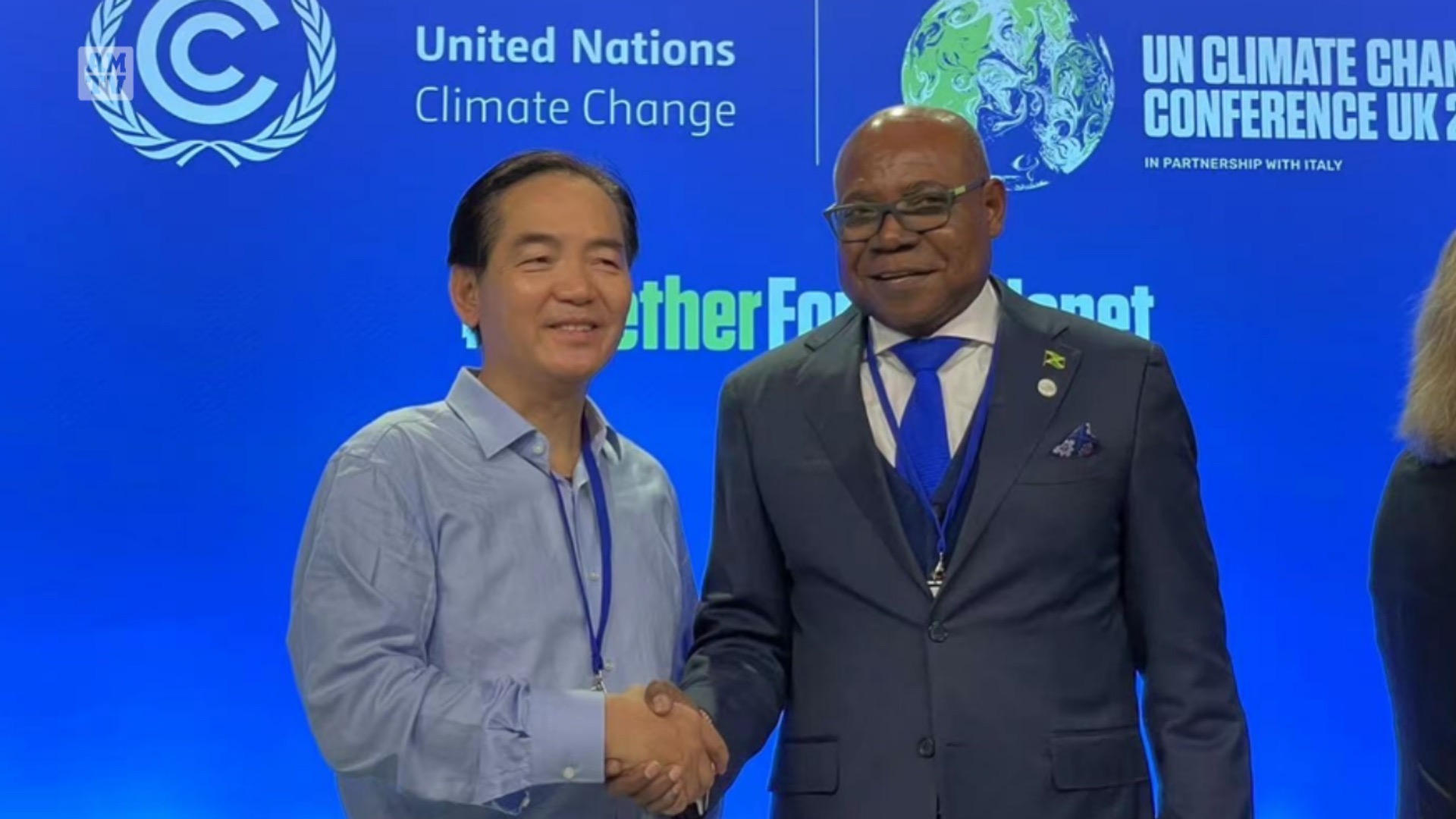 Ms. Harmony Liu, WHF Global Ambassador, the Global Harmony Initiator and the Secretary-General of the WHF Youth Committee, gave a 1.6-minute short speech. The said speech was praised by environmental leaders from various countries present, the famous Chinese educator in the United States, the director of the Asian Affairs Office of the New York State Assembly, and the chairman of the North American Headquarters of the European and American Alumni Association gave high praise to COP26 and Harmony for their active participation in public welfare activities since childhood. 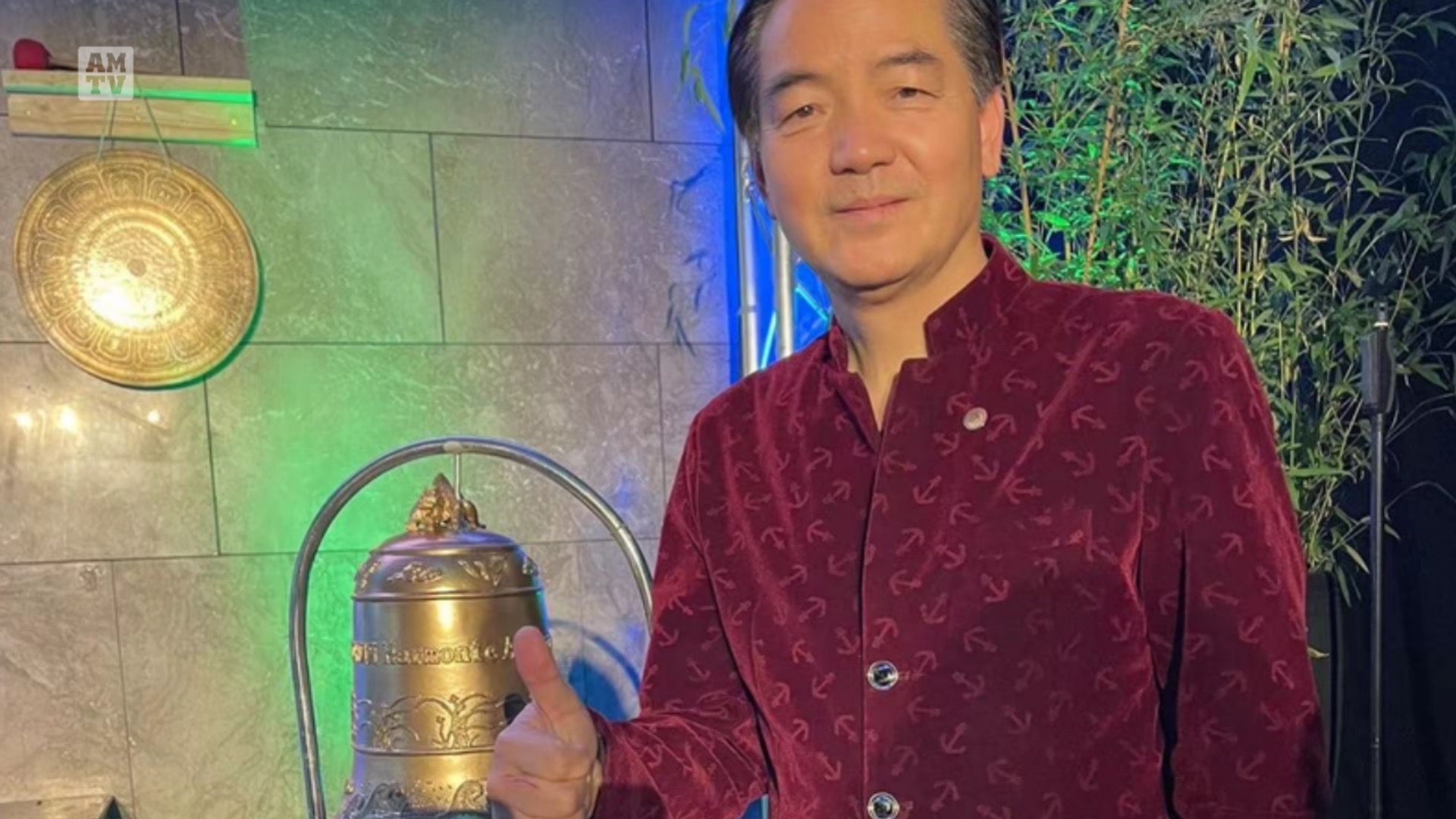 Frank Liu, renowned for his commitment to the environment and to Mother Earth , on behalf of global environmentalists  Protect Mother Earth; sounded “Human and Nature Must Harmony Alarm”. The 2021 “Harmony for Peace” award, was presented to the Honourable Dr. Suzi Park Leggett, the chairman of the World Peace Prize Awarding Council, (WPPAC of 1989); for her contribution to building bridges of peace and harmony between the United States, Asia, promoting South Korea’s new energy-low emission industry program.

The leader of the China Circular Economy Industry Development Centre (CCEC), the co-chair of the forum, Ye Sudan, the co-chairman of WHF, and Xu Fahua, the Executive vice-chairman of WHF and the director of CCEC centre, were duly invited to participate in this conference via video conference. The delegates were presented with the latest “Protection Shield for Coronavirus” and “Penetrating Masks”, to protect them from the ongoing COVID-19 Global Pandemic.

WHF was established in October 2004, to promote harmony between mankind and nature; harmony amongst nations; people, cultures; religions and humanity and above all  the inextricable link of the interconnectedness with the environment.  the WHF has a roadmap based on the establishment of a partnership between global leaders and local communities, dedicated to building a culture of peace and culture, sustainable in line with the SDG’s to ensure that no one is left behind. The WHF encourages children and youths to participate in all of WHF‘s projects,  for example: global environmental recycling, promoting peace through harmony, and creating harmonious bells for peace and green saving our planet, amongst others. “Harmony Promotes Peace” is the first WHF’s global leadership initiative launched to date.

The Harmony Bell was inspired and made for the commemoration of the 60th anniversary of the United Nations, by WHF. The then Secretary-General of the UN Mr. Kofi Annan and the President of the UN General Assembly Mr. Jan Eliasson sounded the Harmony Bell. Members of the Congress Tom Lantos, Caroline Maloney, Lester Wolfe and other celebrities have subsequently rang the Bell of Harmony on Capitol Hill in Washington, D.C.  The East Timorese President Xanana Gusmão and Nobel Peace Prize winner Jose Ramos Horta have also rang the bell. United Nations Deputy Secretary-General Asha Ross Mikiro, on behalf of Secretary-General Ban Ki-moon, also sounded the wake-up call at the 7th “Reshaping Government” Global Forum in Vienna invited by UNDESA Austria. The Harmony Bell invited by Beijing Olympic Committee, during the Beijing Olympics, rang by the champions.

The Secretary-General Antonio Guterres, stated  in his speech at the 76th UN General Assembly in September 2021: “I want to sound the alarm for the world crisis.” Similarly prior to departing , Washington DC for COP26, President Biden stated: “ I will go to Glasgow, The climate conference with a wake-up bell call.”

The World Harmony Foundation reaffirms its commitment to the COP26 and to the future of our planet and decided to bring some gifts to the UN Climate Conference COP26：
1) Invite the celebrities from various countries to ring the world harmony bell
2) According to the spirit of “building a community with a shared future for mankind” adopted by the United Nations General Assembly, and President Xi and Biden’s determination to “harmonise mankind and nature” emphasised at the April Global Day Summit on Climate Clouds. In this conference, the “Global Harmony Action Forum” was  launched, in which Chairman Frank Liu gave a keynote speech on: “Harmony is the foundation of building a community with a shared future for mankind.”
3) Frank Liu, emphasized that in order to end global warming and carbon neutrality, There is a need for technological solutions and actions. WHF introduced the world’s most advanced energy-saving and carbon-reducing clean coal technology; which was introduced at the conference through PPT. Showcased was South Korea’s KOREA JINTECH’s “Nano-3H catalyst-coal conversion additive” technology; which is certified by European and International Standards. Mr. Yan Li, a financier and WHF European co-Chairman, gave a speech on behalf of the scientist at the venue.  Dave Randle, Senior consultant for WHF environmental protection and the  spokesman for solar cars; introduced the innovative and recently launched solar cars; which have the ability to run 1,000 kilometres without charging.

Frank Liu, in his keynote speech further stated that: “I will bring the Harmony Bell to participate in important events in Glasgow, and use the Harmony Bell as a wake-up call for sounding the climate crisis warning and supporting the need to reduce greenhouse gas emissions. It is the mission of the World Harmony Foundation. We appreciate the need to prioritize the harmony between human beings and the earth, and we need to ensure that the world can effectively adjust its climate trajectory. The World Harmony Foundation firmly believes that protecting our earth is the most significant legacy we leave to future generations.” 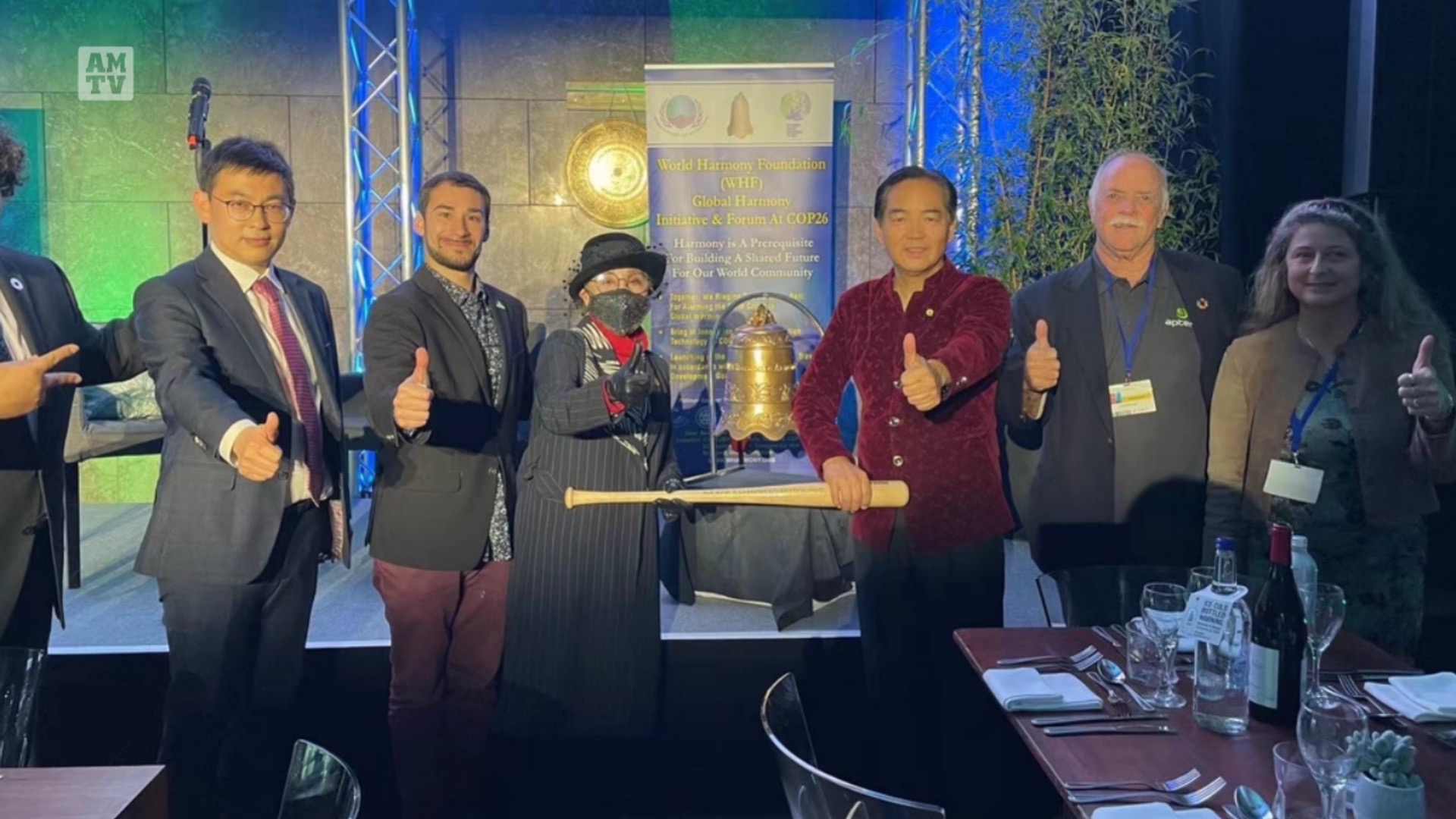 As the Chinese saying goes,”If you don’t reach the Great Wall, not a hero you are!”  2024 and beyond, if you don’t ring the bell of harmony on the moon, you are not a hero. This is a milestone in launching human lunar tourism.